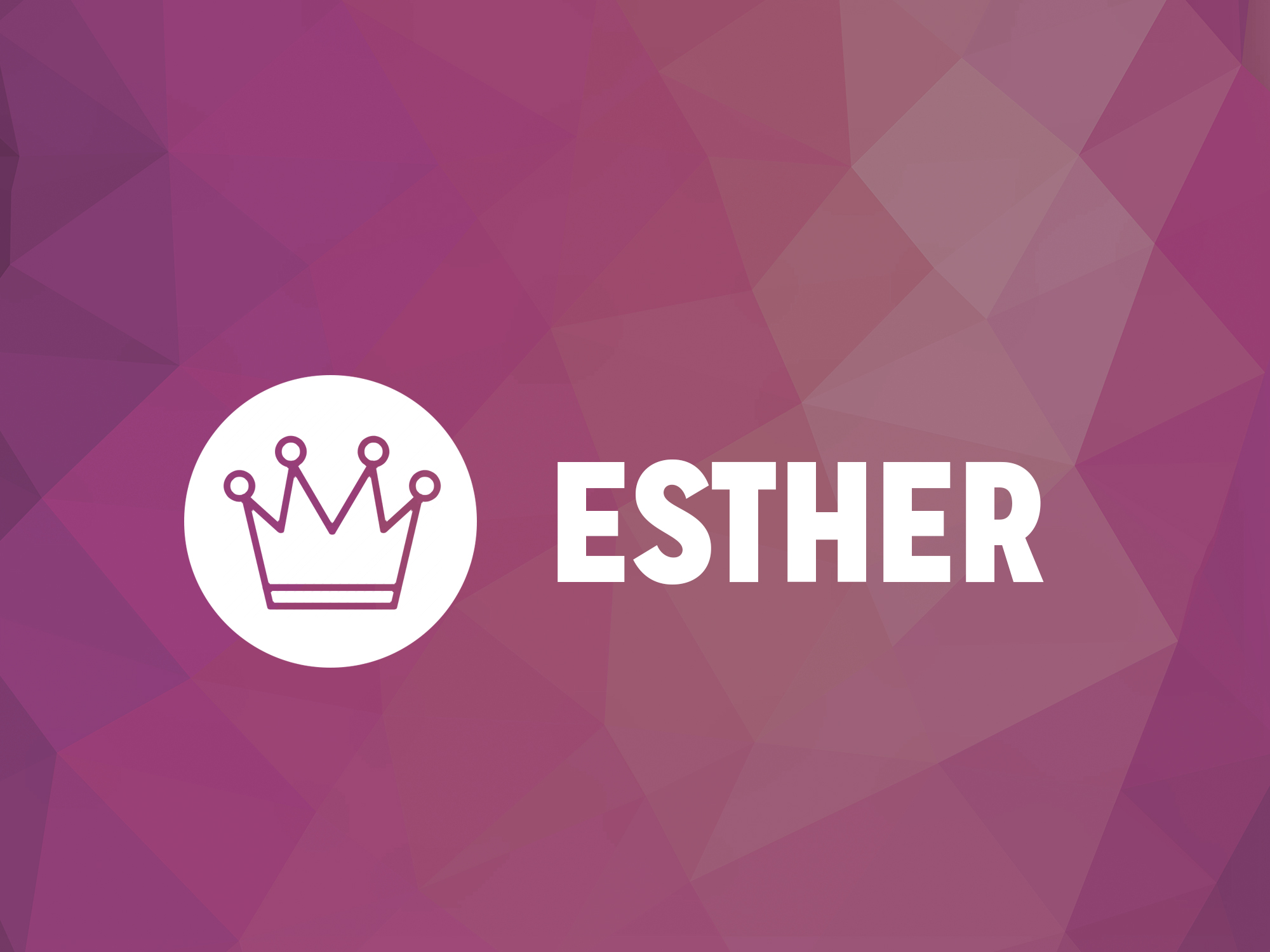 Previously in Nehemiah… The cupbearer to the Persian King Artaxerxes was called by the Lord to go back to Jerusalem and restore a seemingly wayward and discouraged nation of captives who had returned under the time of Zerubbabel and Ezra. Most notably, the city and freshly rebuilt temple was open to enemies since the surrounding walls had not been rebuilt. So he worked hard to organize the Israelites to rebuild the walls of Jerusalem in record time (only about 52 days!), and as governor, he worked in conjunction with the priest, Ezra, to renew the nations understanding and passion for the book of the law of Moses.

BEFORE READING MORE – It would be ideal if you read the chapters to be discussed prior to looking through the outline! This week we are covering the book of Esther.

ESTHER – Esther is a powerful book of trials, favor, courage, irony, and ultimately God’s sovereignty. The key players in the Book include the Persian King Ahasuerus, Esther, Mordecai—Esther’s guardian and 1st cousin, and Haman—King Ahasuerus’ right-hand man. These characters are all part of an archetypal story of none other than Jesus Christ and the cross. Esther is shown favor and is blessed with great position, and Mordecai, in his faithfulness to the Lord, consistently acts nobly despite expected consequences. This sets up all things to work together for good towards both Esther and Mordecai when Haman sets his heart against them. Although the name of the Lord is not mentioned once in the book—it is wonderful to know that He is clearly present and that his people are clearly loved.

Chronologically, the book of Esther takes place prior to the book of Nehemiah. We see both books beginning in the capital city of Susa of the Persian empire. Some sources even suggest the king Ahasuerus in Esther is in fact King Artaxerxes, who granted Nehemiah his wish to return to Jerusalem, and that the queen sitting beside him was Esther!

And the king said to me (the queen sitting beside him), “How long will you be gone, and when will you return?” | Nehemiah 2:6

Although exciting to consider, this isn’t proven, but we can be sure that events of Esther took place somewhere between those of Ezra and those of Nehemiah. It begins with the King of Persia and his Queen, Vasthi.

In Susa the citadel, the King Ahasuerus feasted with the people celebrating his riches and splendor. In his celebration he called forth his Queen Vasthi, in order to parade her beauty before those at the feast, but Vasthi refused what was undoubtedly a shallow request from a drunken man. As a result the Queen was banned from ever seeing this King, and she was stripped of her position. He even sent a degree to all 127 provinces that he ruled over demanding that “all women will give honor to their husbands, high and low alike.” His view of honor or respect seemed to be distorted most likely because of the pride that resulted from his high position.

Nevertheless, Vashti’s departure from the throne left a vacancy that the King soon decided to fill by picking from beautiful young virgins from all of the provinces of his kingdom. Mordecai was a Jew living in the citadel, and he raised the beautiful orphaned Esther (aka Hadassah), who was his uncle’s daughter. Esther was taken to be part of the girls, and she immediately found favor in the eyes of the King’s Eunuch, Hegai, and ultimately the King!

Now Esther was winning favor in the eyes of all who saw her. And when Esther was taken to King Ahasuerus, into his royal palace, in the tenth month, which is the month of Tebeth, in the seventh year of his reign, the king loved Esther more than all the women, and she won grace and favor in his sight more than all the virgins, so that he set the royal crown on her head and made her queen instead of Vashti. | Esther 2:15-17

The favor she found before the King led her to be crowned Queen, and Esther was careful not to reveal her heritage per Mordecai’s request, most likely because the Jewish people were an exiled people and were facing much discrimination as they lived within a nation that conquered them. Mordecai worked at the palace gate and constantly went to the palace to ensure that Esther was ok during the process, and in Chapter 2, near the palace, Mordecai overhears a plot to assassinate the king by two of his Eunuch’s. Mordecai tells the newly minted Queen Esther, the men were captured, and the noble deed of Mordecai was documented in the book of chronicles.

The plot thickens with the entrance of Haman. Haman was essentially right-hand man to the King Ahasuerus. The King decreed that all servants were to bow to Haman, but Mordecai refused to bow before Haman claiming that he was a Jew! Haman was enraged:

The hatred of his heart led him to desire the destruction of not just Mordecai, but of the entire Jewish nation.

Haman went before the King, and he said there was a nation of people dispersed among and that they should be destroyed because it doesn’t profit the king to tolerate different laws. The King took off his signet ring—which represented great power and could be used to issue decrees—and he gave it to Haman to do as he desired. So Haman gathered the scribes, issued the decree, and certified it with the king’s seal “to destroy, to kill, and to annihilate all Jews, young and old, women and children” on the thirteenth day of the twelfth month.

Mordecai and all the Jewish people fell to their knees and fasted and prayed.

So, Mordecai called Esther into action to plea for the people. She hesitated because anyone who went before the king without being called was to be put to death unless he held out his golden scepter, but she was emboldened to do so despite the consequences. She asked Mordecai to gather all of the Jews in Susa and to fast and pray for her as she made such a bold move.

And when the king saw Queen Esther standing in the court, she won favor in his sight, and he held out to Esther the golden scepter that was in his hand. Then Esther approached and touched the tip of the scepter. | Esther 5:2

So Esther was accepted before the King, and she requested a feast to be prepared for her, him, and Haman. Biding her time, Esther was silent at the feast, Haman was oblivious of what was to come, and the King was joyful at what his Queen had provided. Esther invited both the King and Haman to enjoy another feast the next day, and Haman went home. Filled with pride at his position and his exclusive dinner with the King and Queen, Haman was filled with all the more rage when he again saw Mordecai refusing to bow to him. This time, at the behest of his dear wife:

IRONICALLY—that very night, the king could not sleep. And guess what he did…he asked to read the book of chronicles of memorable deeds! The very book that Mordecai was recently written into for saving the king’s life from a evil plot. Haman entered the king’s court at that very moment, and the king asks “What should be done to the man whom the king delights to honor?” And in his pride and foolishness—Haman thought the king desired to honor him! So he said:

Haman was utterly shocked when all that he suggested was done to Mordecai; when he realized that Mordecai was the man whom the king delighted to honor and not him!

He wallowed in hatred and shame back home, but was immediately called for the second feast before the King and Queen. The onslaught on Haman continued. Esther revealed the truth of her heritage to the King and proclaimed Haman as the wicked foe that sought to destroy and kill all her people, which would have included her!

So Haman was hanged on the very gallows he constructed to kill Mordecai.

The king removed the signet ring from Haman and put it on Mordecai, making him second in rank to the King. And Mordecai reversed Haman’s decree on the Jews, giving the Jews the authority to destroy any nation that rose up against them.

The Jews destroyed their enemies, prospered, and established the feast of Purim in which much was given freely as gifts. They were once again greatly feared among the people.

Can you imagine Jesus Christ and the cross? The wicked officials, the wicked men, and the wicked accuser, Satan, all gathered together to mock Him, to spit on him, and to humiliate him by murdering him by the worst way possible. They probably all thought, like Haman, that they were “going to get him!” They probably thought: “Let’s get this guy who refuses to bow to us—Let us destroy him!” Imagine that even the enemy thought that!

Even Satan thought that he would put an end to Jesus Christ, the son of God, once and for all!

But he (they) didn’t realize that he was setting a trap for himself.

Instead, in God’s sovereignty and love, the stage was set for our Savior to die once for all!

The very cross that Christ was sent to, that was meant for His destruction, like the gallows meant for Mordecai’s, became the tool and the symbol of the enemy’s end. The cross put an end to the sting of death. Such is the blindness of the wicked and prideful that their hatred against God would lead only to fulfilling God’s will.

My son, walk not thou in the way with them; refrain thy foot from their path: For their feet run to evil, and make haste to shed blood. Surely in vain the net is spread in the sight of any bird. And they lay wait for their own blood; they lurk privily for their own lives. So are the ways of every one that is greedy of gain; which taketh away the life of the owners thereof. | Proverbs 1:15-19