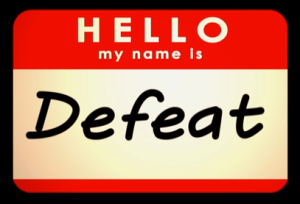 Click on the name tag —–> and listen as you read.

The other night, I called a friend and admitted to her that I had once again failed to do the right thing in a specific area of my life. Guilt and shame had overtaken me and I spent the whole day thinking about what a terrible person I was. As soon as I realized what I had done, I confessed it to the Lord and knew in my heart that he had forgiven me, but couldn’t get rid of the heavy feeling in the pit of my stomach.

Do you ever feel like your sin is overwhelmingly something that you can’t get under control? Does it bother you that you know the right thing to do, but give in over and over again to sin?

It must have bothered Paul, one of the most down-to-earth characters in the Bible, who referred to himself as the chief of sinners (1 Timothy 1:5). Maybe you don’t feel like you can relate to Paul, but he’s basically giving my testimony in Romans 7:22-23:

The Bible tells us that we are slaves to sin. That’s our natural state. The most abnormal thing for human being to do is NOT sin. Because this is true, am I justifying the fact that I fall into sin over and over again? No.

Here’s the thing. You’re probably going to say that you already knew this, and I believe you. But the other night when I was sitting on my bed upset with myself and completely deflated because I failed again, I forgot this fact: Jesus took care of it. He died on the cross 2000 years ago and defeated that sin that I was sitting there grieving over.

He died to set me free from the guilt of sin, and here I was suffocating under the weight of my guilt. It’s not sin that defeats us as Christians, it’s guilt.

The Bible tells us that one of the devil’s tactics against us is to keep us reminded of our past. In Revelations 12:10, we are told that he accuses us day and night before God and is relentless in reminding us about our sins and failures. If he can make us feel defeated, he knows that we will not be effective Christians. Instead of going out and joyfully proclaiming that we’re forgiven, we shuffle along with our heads down confessing the same sins numerous times and feeling like no matter what we do, we can’t really get close to God because of our sinfulness.

What the Lord promises us is that once we confess, He will not remember our sins anymore (Hebrews 8:12). God doesn’t just forgive our sins, He forgets them. And today, I am hoping to remind both you and myself of God’s gracious forgetful memory. Max Lucado says, “just as it’s against your nature to eat trees and against mine to grow wings, it’s against God’s nature to remember forgiven sins.”

Dressed in His righteousness alone,
Faultless to stand before the throne.

Regardless of the type of sin you’re falling into, a big sin, a little sin, a habitual sin or a just a teeny occasional sin here and there – the truth is that we ALL sin. We hate it, and Paul hated it. But we still sin, just like Paul did. The truth is that if we were able to live a sin free life, there would be no point in having a Savior. If the rule was that we have to accept Christ and then never sin, then nobody would ever be able to get to Heaven. God has a plan for your life and mine, and He doesn’t require that we are perfect in order to fulfill that plan. Every situation in your life is custom designed by God, and Satan is trying to keep your life as ineffective and uninspiring as possible.

Don’t feel defeated because you are a sinner. The only requirement for being a Christian is that you have to be a sinner first.

"I need no other argument, I need no other plea. It is enough that Jesus died, and that He died for me." I Need No Other Argument - L.H. Edmunds View all posts by Julie